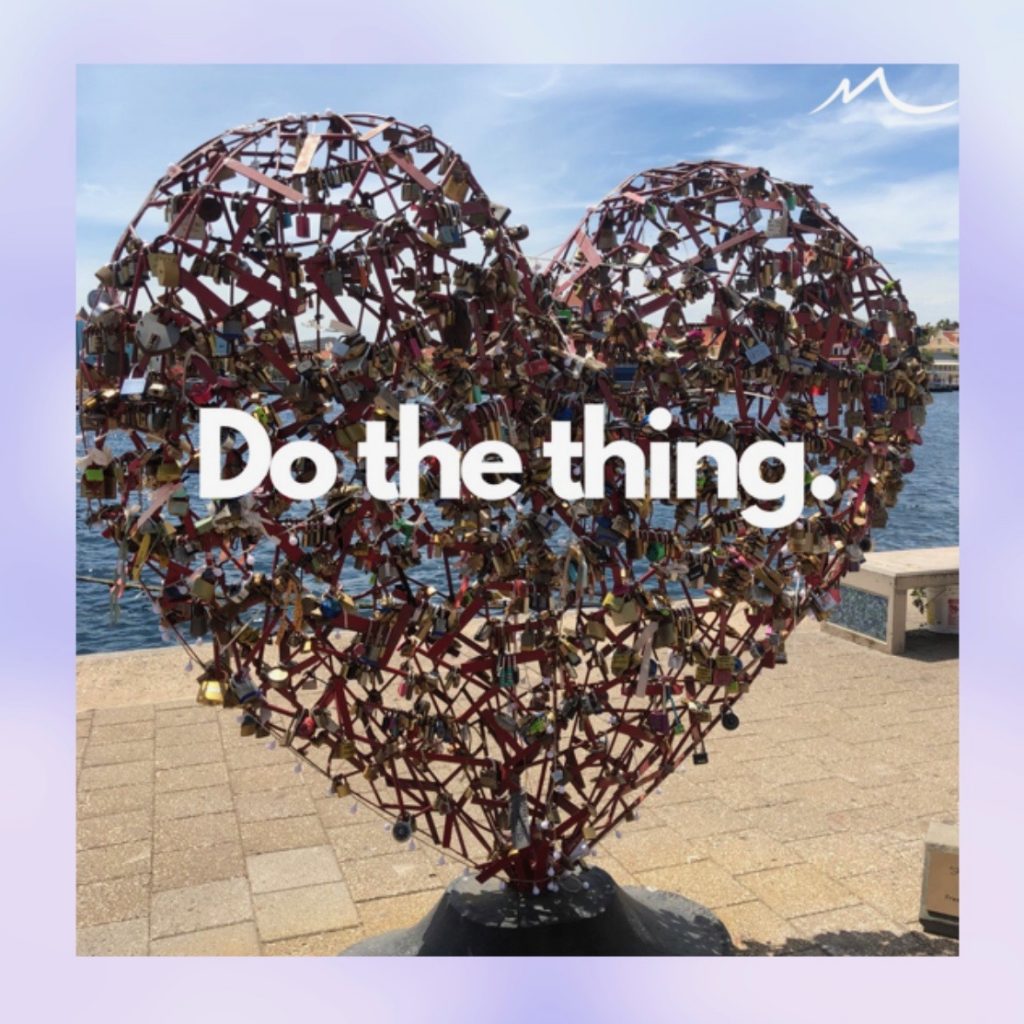 I recently got to spend a weekend with a friend from out of town. Our time together was about releasing what no longer serves us, practicing the art of self-care, and restoration. We ate beautiful food, got massages, sat together in meditation, and then talked and talked and talked. It was heavenly.

Something she said to me didn’t sit right for a few days after she left. “You say ‘the thing’ a lot—‘do the thing’…that’s interesting.” For days after she left to go home, I didn’t feel interesting at all. My ego was talking to me—am I predictable? Boring? Can’t think of anything else to say? What do I mean when I say that, anyway?

I whipped out one of my tools—the “become the observer” technique. I watched myself, heard myself say it several times—out loud and to myself—and noticed what was happening. You see, the actual “thing” is often separate from our ideas about the thing. Sometimes they aren’t related at all.

One conversation was with a woman entering a high-level profession for which she has studied and prepared for almost a decade. “I finally got here, got the job, and it’s not anything like what I thought it would be.”

Another person was resigning from a position to take another at a different company. Even though he was clear this was the right move, he couldn’t shake the feeling that he didn’t want to “be a quitter.” I suggested he wasn’t worried about quitting, rather lamenting the job he *thought* he was taking, not the one it turned out to be.

I spent 10 years of my life studying, teaching, and performing in the classical music world as a violinist. The “thing” I thought it would be about was that I love music and connecting with other people. It turns out in that world, spending 6-8 hours a day alone in a practice room is the “thing” required in order to progress to the next level, and the next, and the next. Hmmmm.

Take a look at your ideas about “the thing.” Then notice what the “actual thing” is. I say when there is a disconnect, we give ourselves permission to change course. Saying goodbye to what no longer serves us is not quitting. Leaving a situation because “doing the thing” isn’t the same as your idea of the thing doesn’t automatically make you a quitter.

The flip side of this is the magic you feel when “doing the thing” IS the part you love. When I show up to work and am authentically engaged in what I’m doing, for the sake of doing it and doing it well, nothing else matters. There is no external recognition or fancy title that can ever compare to just doing “the thing.”